#MemoryMonday
Each Monday, we will be posting a new #MemoryMonday post, which will include a picture and history from the downtown district. Stay tuned to our website, Facebook and Instagram pages for updates every Monday! All images and information are courtesy of the Ann K and Preston H Leake Local History and Genealogy Collection at the Appomattox Regional Library. 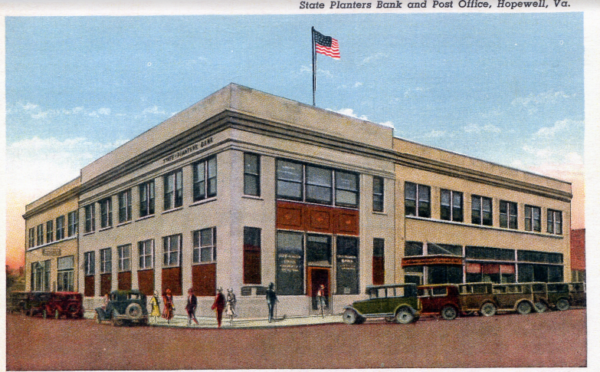 200 N Main Street
The corner building was completed in 1928 and housed the State Planters Bank for many years. The Post Office and the Public Library were also once housed in this building. It has also been home to many prominent doctor’s and lawyer’s offices. Currently, this building houses the Ford Agency and Sun Trust Bank! The other buildings pictured have historically housed retail businesses and currently is home to Gardener’s Gate and Little Shops on Main.
[hr]
Monday, October 30th, 2017 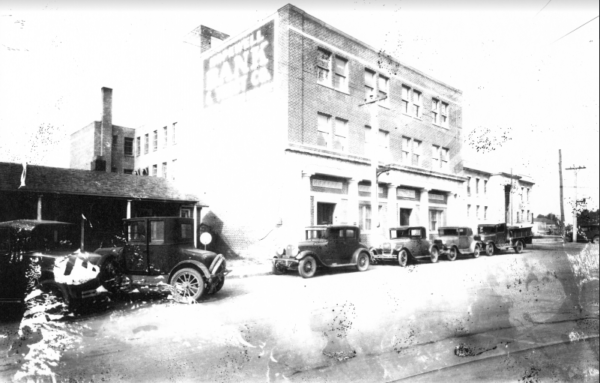 224 N Main Street
This building was constructed as a single story building in 1928, and opened as the Hopewell Bank and Trust Company. The three story addition was completed in 1931, when it became the Randolph Hotel, which was a popular place for civic organizations to meet. The bank closed in 1937 and the hotel occupied the entire building until 1961. The building was renovated in 1961 to accommodate the Southern Department Store, which operated until 1967. Since then, the building has gone through periods of vacancy as well as housing a variety of businesses including Hopewell Office Supply, the Courthouse Cafe, Blaha Bonding, and many others. Today the building houses Burnett and Williams Law Office, Broadway Barber Shop, and Ligon Jones Insurance.
[hr]
Monday, October 23rd, 2017 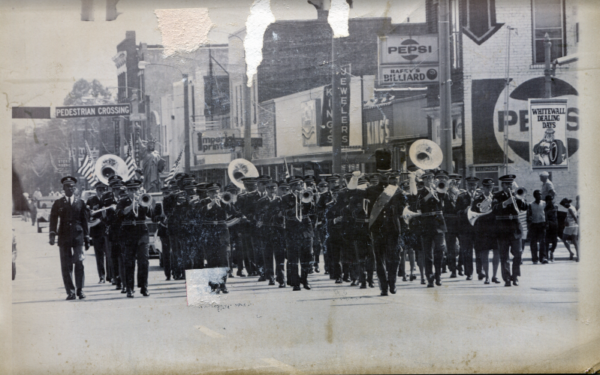 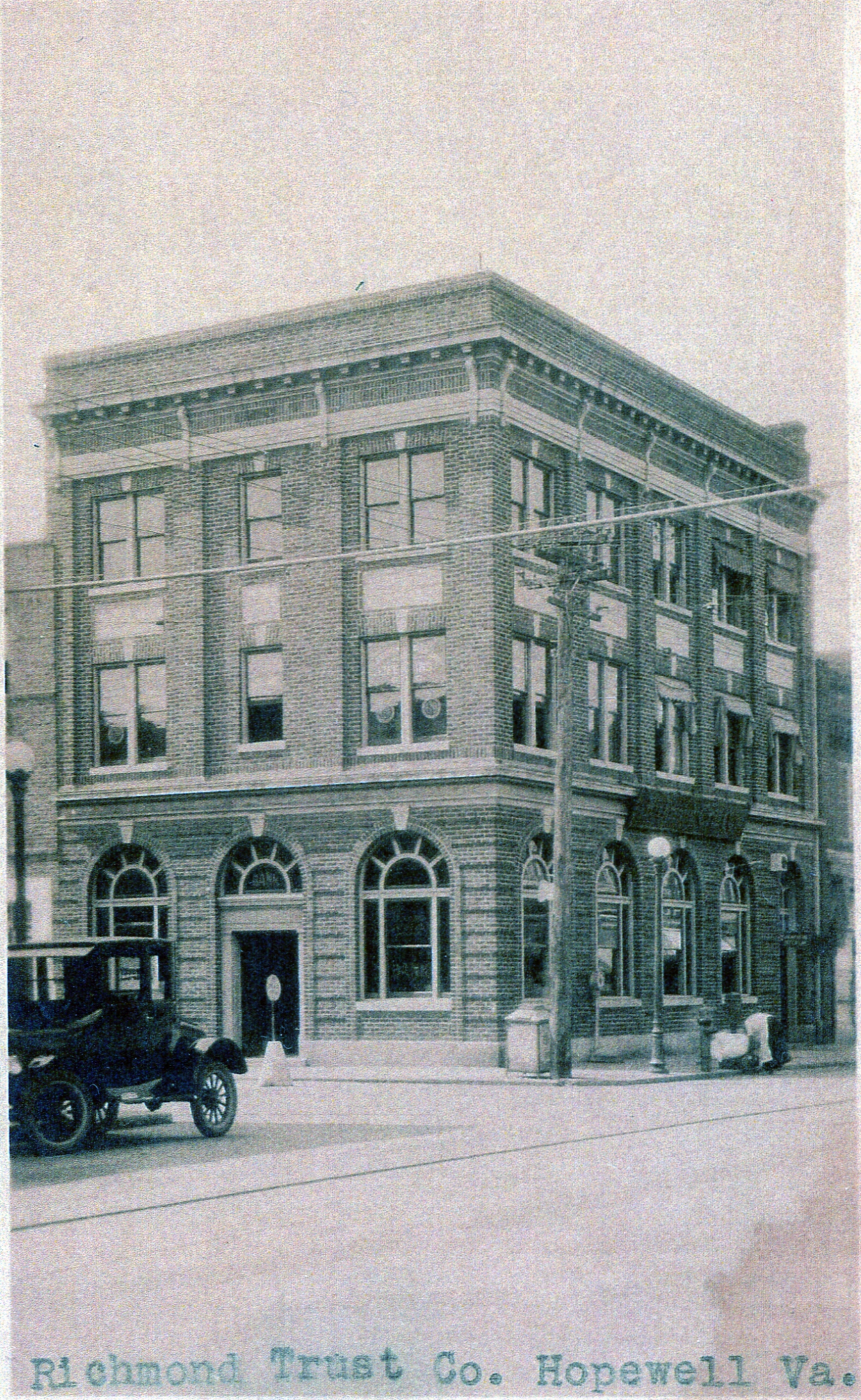 264 East Broadway
This is considered one of the oldest buildings in our downtown district. This building appears in 1916 as the National Bank of Hopewell in the Hopewell Evening Record. The bank occupied the first floor with office space on upper floors. In 1923, the bank closed for two months due to “corrupt practices of a cashier” and reopened as a branch of the Richmond Trust Company. The Richmond Trust Company closed in 1931. 10 years later, in 1941, the building reopened as the Chesterfield Hotel and Restaurant. The building remained the Chesterfield Hotel and Restaurant until a fire damaged the building in 1981. The building sat vacant for 15 years until purchased and renovated to a restaurant space on the first floor and rooms for rent on the upper floors. Sushi Y, a family owned and operated sushi & hibachi restaurant now occupies the space. Be sure to stop by and check them out!
[hr]
Monday, September 25th, 2017 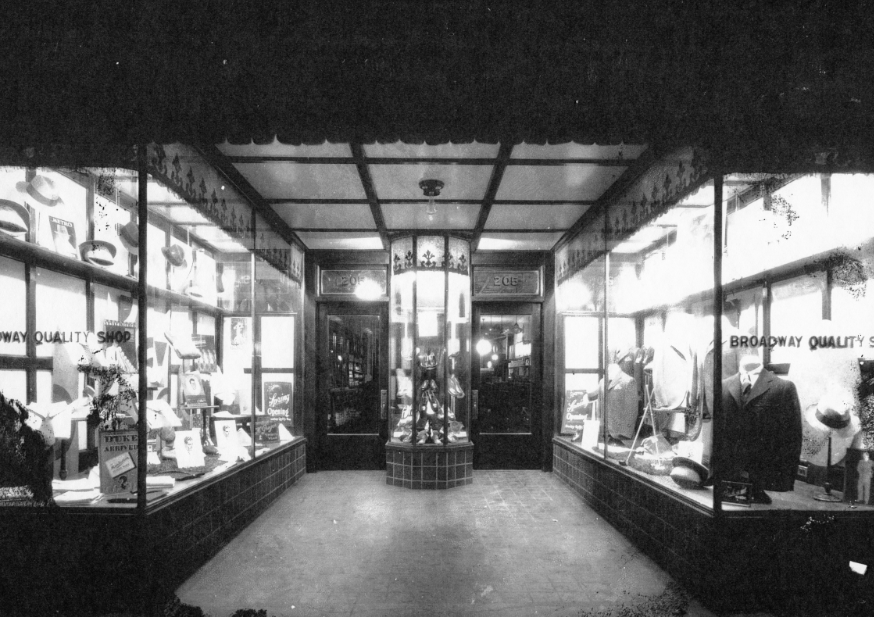 205 East Broadway
This building is first mentioned in Hopewell history in 1926 at the Hopewell Loan Company (which turns out was a pawn shop). It then went on to become a variety store in 1928. The upstairs then transformed into a couple of beauty shops, most notably, Doris’ and Helene’s. In 1929, the Broadway Quality Shop moved into the building, and was a men’s clothing store. The famous Aldridge’s moved in the 1940’s and remained until the mid 1950’s. After Adlridge’s, Sherwin Williams moved in until the 1970’s. It has been home to many businesses since, and is currently the home of the The Silver Unicorn and The Time Capsule.

Find awesome listings near you!